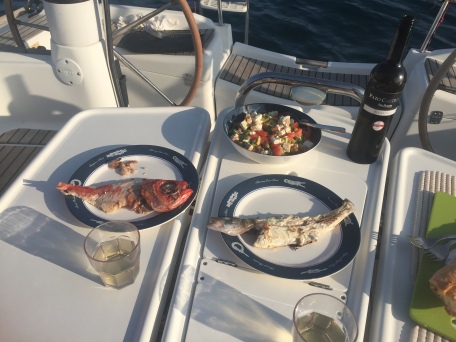 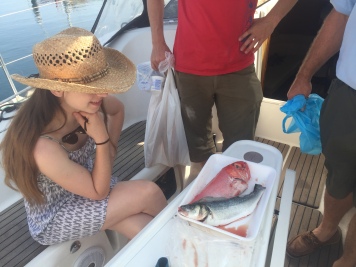 If I were a ship on its maiden voyage

I would invariably face south, only if you were there

I would float west, whatever climatic weather

I would turn east, forge or even bear North West

I would forsake the compass, and its trusted North

Just…to have your wind in my sails

“Its like Millport on a wet Sunday” sighs Paul as we huddle under the parasol, now doing a feeble job as an umbrella, our feet splattered with muddy spray from the raindrops dotting all around us.

“You’re on yer holidays, enjoy it!”

We all laugh and finish up our Estrella Galicias at this campsite bar and decide it’s time to make a dash for the beach and dingy back on board before the lightning and thunder make this foray a little too risky.

Stravaigin is anchored off the beach at the pretty little Cies Isles, a nature reserve visited by hoards of visitors disgorged from relentless passenger boats from early morning and sweep away by evening to leave it peaceful and relatively quiet save the ardent campers at the campsite, the distant funky tunes from speakers and faint whiff of accompanying “herbal” tobacco, drifting over the bay.

We had spent a delightful day or so in Vigo, restocking, washing, eating squid, peppers padron, drinking wines and beers and generally relaxing. The captain haggled with a smiling Senegalese for a wide brimmed sun hat for me and I felt quite chic strolling along the esplanade. “Fancies her barra” my mum would day!

It was sadly time for Stuart to leave and return to his fascinating life between Toulon and Cambridge. I so enjoyed meeting this lovely, calm, appreciative, kind and intelligent gent. I had looked forward to my night watches with him when he would tell me stories of his life. We were fellow Glasgow University graduates and I shared stores of my childhood holidays on Islay where he had lived for a while. He talked into the night, his gentle voice wandering over the silvery waves, of early jobs in Texas as he was in petrochemical engineering, later times in Dubai with his family, the Congo, Muscat, Abudabi – all so exotic and classy sounding but I knew from his basic tastes and unmaterialistic ways, he would be happy with a good cup of coffee and a decent paper to read. We chatted about mutual experiences of the North Sea oil rigs as he had worked out there, just like the Captain who did a spell in the early days. I recalled the shifts patterns, the canteen meals he told me about , the disappointment when his back to back did not appear so he had to stay on, shortening his time ashore with me. Then the hedonistic days when he did come home, a fistful of dollars to spend on me! A man’s world out there, with a girl waiting at home.  Stuart smiled knowinly.

He clambered ashore and bade us a fond farewell, he stated it was one of the most enjoyable voyages he has taken, with some of the best company and good food he had experienced – pretty good accolade for a mariner with 60,000 miles at sea on his log.

As he went the bonny Aimee arrived. Stewart’s pretty girlfriend joined us having flown from Scotland to meet her boy the day before and had already explored Vigo. A self-assured and brave little lady, although she had recently returned from kayak guiding on the Amazon, she was delightfully unpretentious and had a beguiling innocence about her. It was nice having another girl aboard and I enjoyed seeing nice toiletries and pretty shoes lying around – a change from Lynx and smelly socks!

We left Vigo restocked, explored the greater bay area, the islands and spent the final night in Galicia anchored off a delightful remote beach, so calm and uninhabited. The first BBQ off the stern was a success, had to be meat for the gang and peppers for me as despite the gallant efforts by Paul to catch, trap, barter, buy, cajole local fisherman, no luck.

Next day meant the departure of the rest of the crew as the happy go lucky, always upbeat Paul reluctantly had to return to “real life”. I hugged him goodbye but knew we would meet again back in Alba, future sailing trips surely to come. I felt I knew his sassy American wife and active kids from all his stories. His humour and self deprecating style had been a real tonic and we would miss him. He left a really touching note in the chart table and I felt privileged to have met such a lovely man.

The young lovers took their leave as well, having enjoyed the time onboard but obviously eager to spend time alone, discover, explore and build their own memories as a couple. I smiled as they walked off, heavy bags on shoulders, but the lightness of life buoying their steps.  I envied them in some ways to have their  future lives ahead pf them. They will have such fun, such adventures, already having a home together and planning careers, who knows maybe even children someday – the greatest and most rewarding adventure of all.

I’d do it all again in a heartbeat.

Then it was just the two of us. We smiled at each other. “Its just you and me now babe” smiled the Captain as we headed south to Bayona.

I called wee Mum once at anchor and she told me all about when she and her dear late friend from Art School had cruised there and how she had bought not one but three pairs of designer sun glasses and a lipstick, of course.

How I adore her, her memories of travel are always highlighted by fashion, shopping and elegance. If I am half the women she is, I’ll be happy.

Morning light brings northerly winds to push us to a new country – Portugal.

We up anchor and set out, just the captain and me.