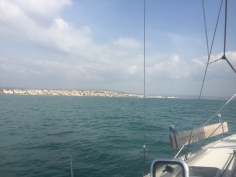 Down these coves of limestone and cockle shells,

Down these roads that wander as lost as the heart,

Is a chance to breathe again, a chance for a fresh start to you

My my a chance to breathe again, a chance for a fresh start to you

Oh my a chance to breathe again, a chance for a fresh start

Oh, no, see these waters they’ll pull you up,

Oh, no, if you’re bolder than the darkness.

My my let these songs be an instrument to cut here darling,

These spaces between the happiness and the hardness,

It would seem there is crime on this happy little holiday island as we realised the police motor boats, moored alongside us, were prisoner transfer boats and once or twice a blue lighted vehicle would drive up to the end of the pier and someone shrouded in a blanket was ushered aboard and off it sped. It did take 12 police men on one occasion to execute this procedure, but some were standing about smoking a fag while others chatted away. I had discovered there is a jail in the town but hadn’t thought much about it, I thought maybe it was like Inverary Jail, a visitor attraction with wretched looking dummies in cells hanging on to the bars. But these were no dummies. This quay provide plenty more entertainment as a large Sicilian, clad in black sweatpants and a well too small t-shirt, large gold chain round his neck, grey goatee and grey hair tied in a pony tail appeared with a skinny apologetic looking man at his side. They pulled on the lines of a large motor boat which was moored bow to, until the prow came close enough to the quay side for one to clamber aboard. We watched as there seemed to be some confusion who was going aboard and the wind was pulling at the boat as it strained backwards, when suddenly the skinny guy grabbed the hand rail and attempted to get on. He was committed, as his arms went with the boat and his legs remained on the dock! Oh jeez he’s in for sure I thought but, he threw one leg round the hand rail and hung on for all he was worth, while the large Sicilian shouted encouragement. The wee skinny guy was like a koala bear hanging on as the boat eased back and he actually managed to get the other foot on and scrambled across the deck before giving a thumbs up. We applauded as his boss shook his head, his hand across his eyes. I was exhausted watching him! He then had to manoeuvre the boat back to the quay to collect the boss which required much Italian gesticulating and shouting but he did it and somehow the pair swapped and Tony Soprano took off on his burgundy speed boat while Norman Wisdom stood on the quay waving fondly after him.

It was our last day in Favignana, the weather  forecast was good to go the following day to make the last hop down to the southern coast of Sicily and journeys’ end for now. Favignana threw out its worst, with winds that shrieked across the bay and sent Stravaigin in a choppy dance, threatening to bounce against the quay side, making us re-tie ropes and alter angles to make sure she did not contact the stone. I could not stay aboard as it was like being inside a bucking bronco so I went off on the bike for a last tour of the island. It was raining slightly but nothing that I’m not used to on Scottish bike rides so I enjoyed passing little farms with damp sheep, a black horse sheltering in a field barn, bee hives standing sentinel at the back of a wild flower carpeted field and snails everywhere. The locals were out with bags scooping them up. The rain got heavier and I attempted to ride up the hill to the fort at the top but a bolt of lightning scared me back and I stayed on the low ground until the rain became torrential! I took shelter in a wee café but there were literally rivers flowing from my trousers and jacket and I felt a bit awkward as the elegant Italian ladies sipped coffees, peering at me over designer glasses, so I zipped up my cagoule and headed out again. I raced back to the boat as lightning hit the town tower with a crack and boom that made me pedal faster!  The gods were obviously displeased! Back on the boat I dried out and we packed away the bikes and got the boat ready to leave at dawn the next day.

The sail down the coast was long, winds in the wrong direction so we had to motor quite a bit. Still sunny enough to get a bit of sunbathing in but beating in is tedious and makes me feel ill. We found an anchorage, of which there are not that many, near a breakwater and eased in to the shallower waters to drop the hook just as the light was fading. I was on deck with a torch and ready to anchor, just as I turned to the captain to ask if the depth was ok as it suddenly looked shallow when a shuddering motion made the boat feel very odd. We’d nudged into an unmarked submerged sand bank. It was like the D-day landings and I thought we were heading up the beach!

Full steam reverse MacPhail! Luckily J managed to pull her back in time and she freed herself from the bank and we were out in the bay again. Second time lucky and we anchored safely and settled down for the night though I was a little unnerved and kept checking out the hatch we were still ok.

Another early start the next day, last sail at sea was bright and sunny, some large bottlenose dolphins joined us for a while and endless Mediterranean jellyfish floated by in streams for  hours, large yellow, greenish circles flowing by.

We got our first glimpse of our new home for the winter at around 2 pm and a marinera sped out to meet us and get us tied up at E30 our berth for the winter.

Marina Di Ragusa seemed nice, modern marina with all we needed and looked what we hoped for when we booked it on the internet some months previously, always a risk. The town was lively and as we strolled along the promenade to the town square were greeted by an open air rock concert and a festival going on. A soul bar was serving free tapas with every drink so we settled in to this quite happily. Think we’re going to like this place.

We walked back to our berth at the end of the night feeling quite pleased with ourselves that we had made it, after 10 weeks to the day, we had sailed around 3,000 nautical miles and we were here safe and very happy. Now the next adventure begins!